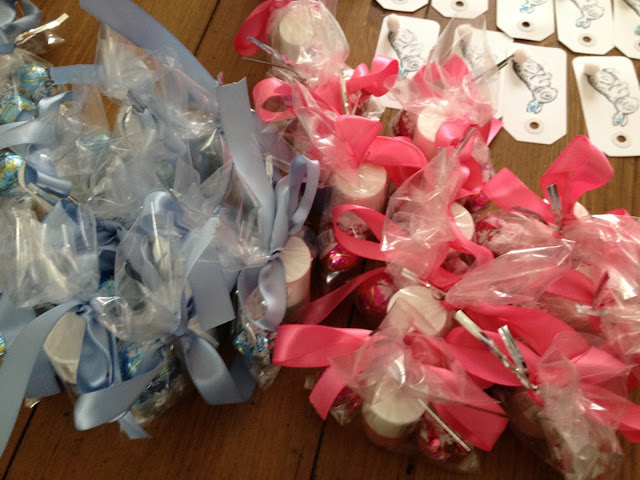 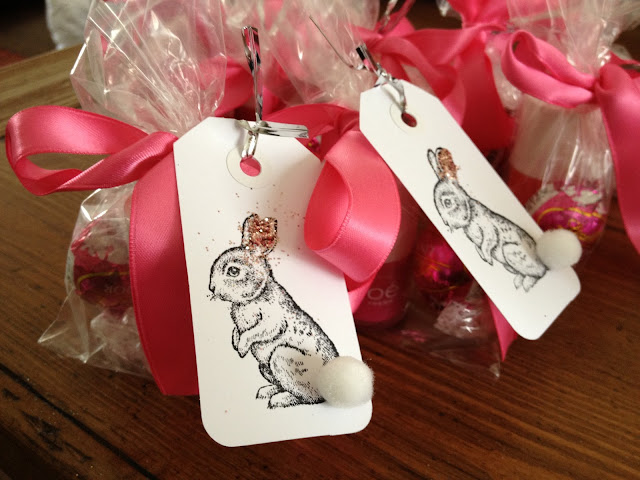 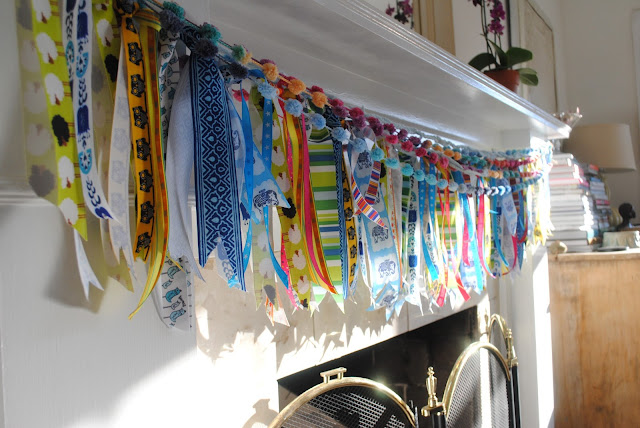 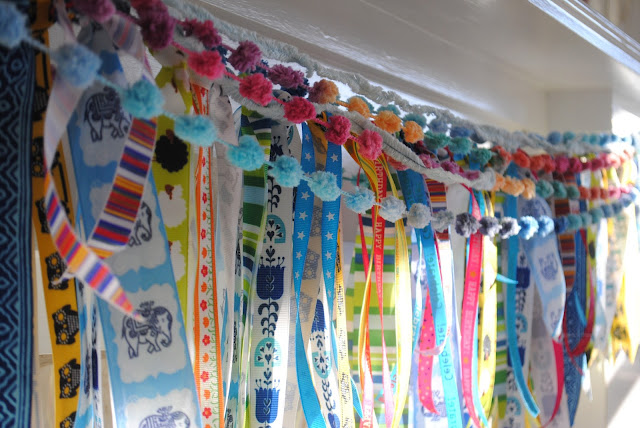 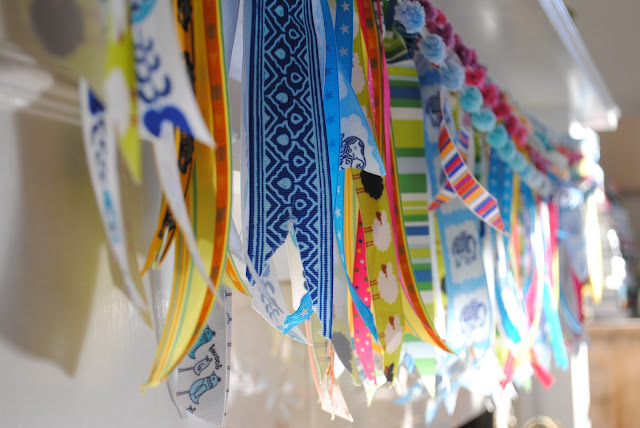 I'm a month away from being a Grand Mamma....I still don't have any idea what I want the baby to call me, but I think GRUMPY may be the word for Granny me. Have you heard the expression "Tea Cup Kids?" It's a name teachers have for today's generation that have grown up being told how smart, beautiful, talented etc they are. ALL THE TIME. Kids who win trophies because both teams get one, kids who play soccer games with no score, kids whose teachers can only select positive comments on report cards, when both kid and parent needs a firmer truth. It's a fine line between boosting a child's confidence and fixing his/her life to avoid all things that can cause distress, no matter how mild. I may have been a tough mum. If I didn't want my kid to touch a snappy dog, I would say "don't touch the dog, he'll bite your face" If they didn't behave in a restaurant, I didn't count to 10 (I hear parents counting 5 rounds of 10 these days) I gave them one chance to sort themselves out, or we left. I never had TIME OUT on a little chair in the corner with books and toys, I sent them upstairs to spend 15 minutes in their room. I didn't negotiate and discuss things when they were young. My parenting style was based on YES and NO. Maybe I scarred them or traumatized them with my old fashioned parenting....they seem ok.....they seem to love me and respect me still.....

Anyway, Grandparenting will be a whole new cup of tea and one I am really excited about. I am hosting a baby shower on Sunday for my Daughter in Law. I've nothing planned yet, although invites are sent out. We have no theme because we don't know the sex of bubbie. I hate shower games where you pass diapers around and guess which has the chocolate poop in it, or the ones where you sample baby food. Does anyone have any good ideas for shower games or little take home favors for my guests? I would love your input. So far, all I have is this ribbon bunting I made to decorate the room. 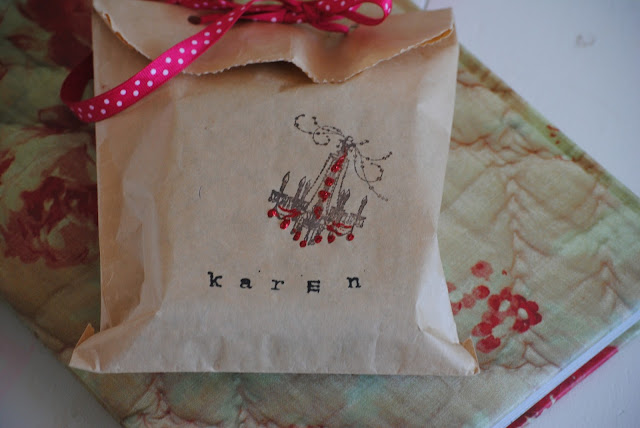 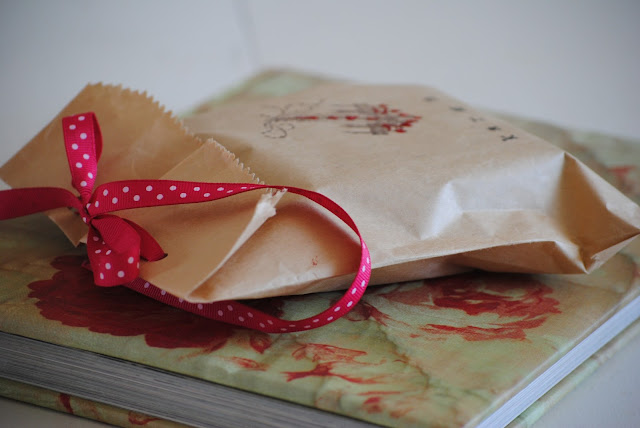 We're attending a 60th Birthday Bash tonight for a fairly new friend. Women get more and more interesting as they age, shedding any self consciousness, expectations, roles and duties for a boldness, confidence, and Joie de Vive that truly becomes them. The Birthday Girl is no exception. She's fashionable, curious, interesting and a bit edgy. She just got married last year to a fellow with 3 kids to join up with her 3 in Brady Bunch fashion. A delightful mix.

I love buying gifts for people whose style I admire and like myself. So this one was easy. I packaged it in a brown paper bag, stamped with her name and a chandelier dripping in glittery jewels. 60 is her time time to sparkle.

What's in the bag you ask? A Swedish clipped hide cuff with a gleaming polished half that looks like it was dipped in silver. I like the juxtaposition. Rather like being 60. 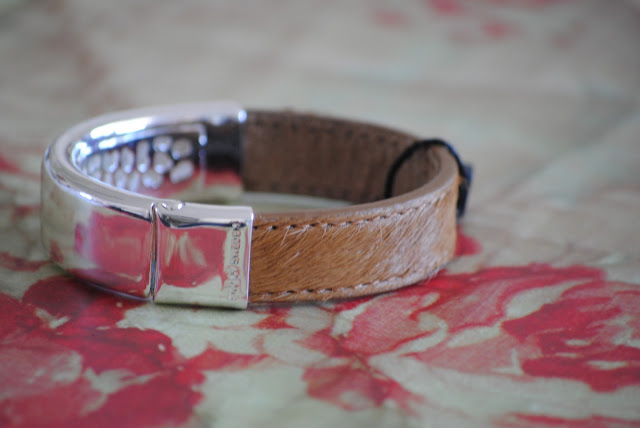 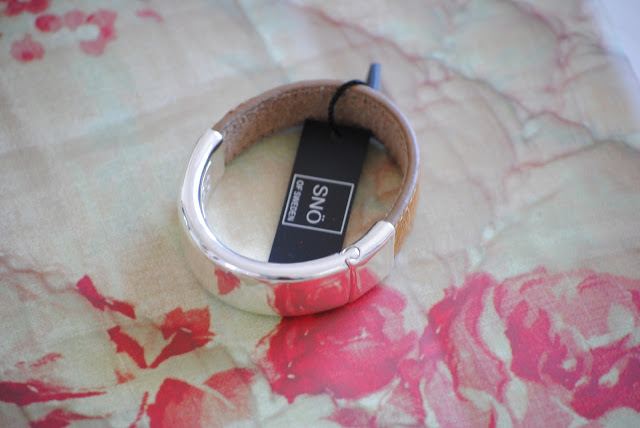 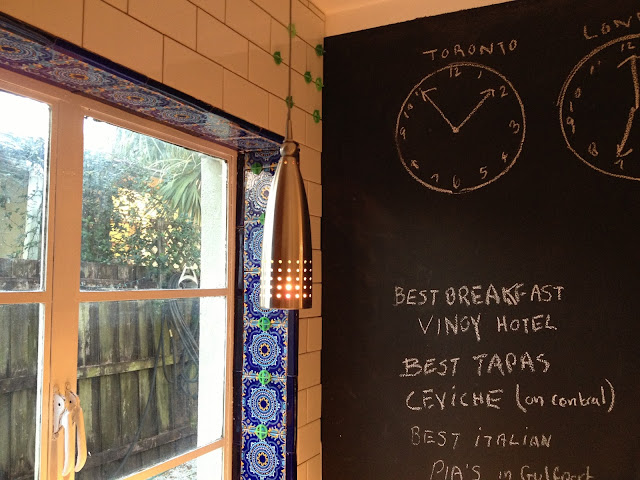 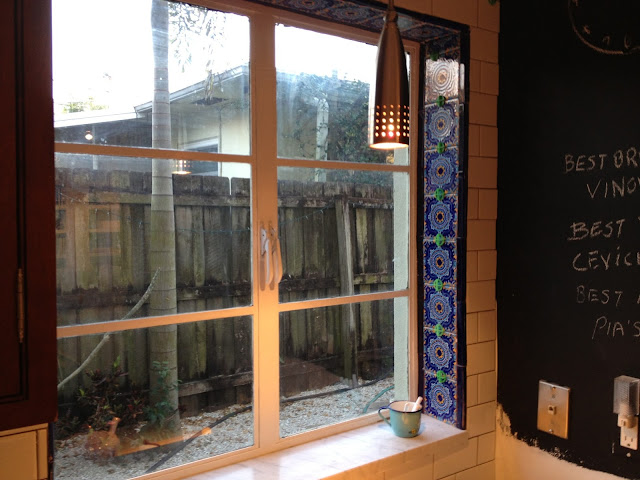 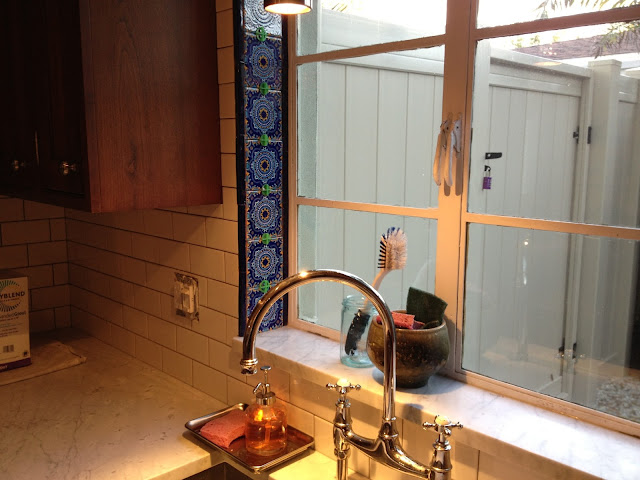 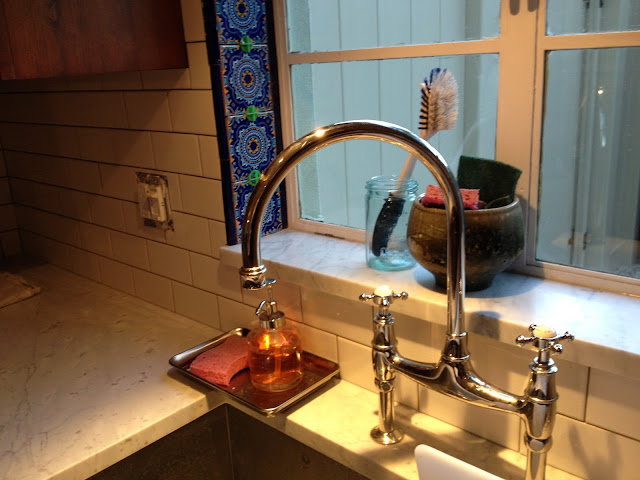 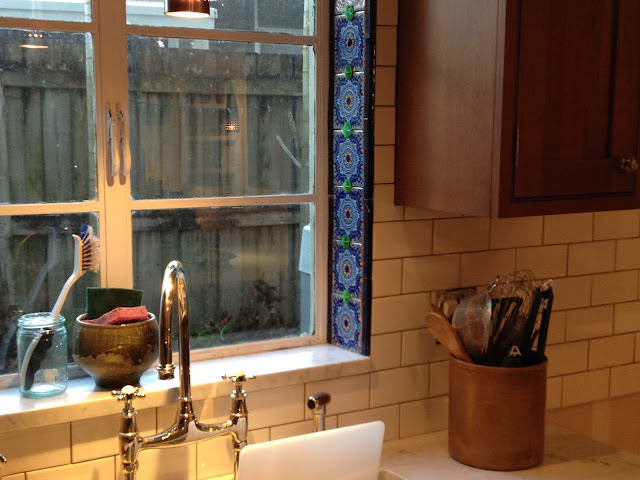 The tiler has left for the day, and tomorrow we are leaving, so it will be a while before I see my kitchen wall tiles all grouted and polished, but I thought I would give you all a look at it. The wall tile is a crackle finish subway tile that I took all the way up to the ceiling. We have low ceiling on this level and I thought it would give it some height. For the windows, I used a handmade (and quite wonky) Mexican tile in a vivid blue, turquoise and yellow to give a hint of Spanish to this old Monterey style home.

And, the best news of all is that the Insurance Company has approved the claim for the damage.
Posted by Razmataz at 6:07 PM 8 comments: 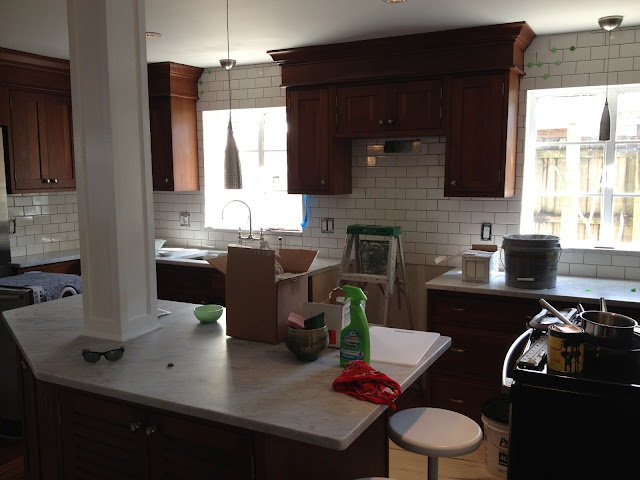 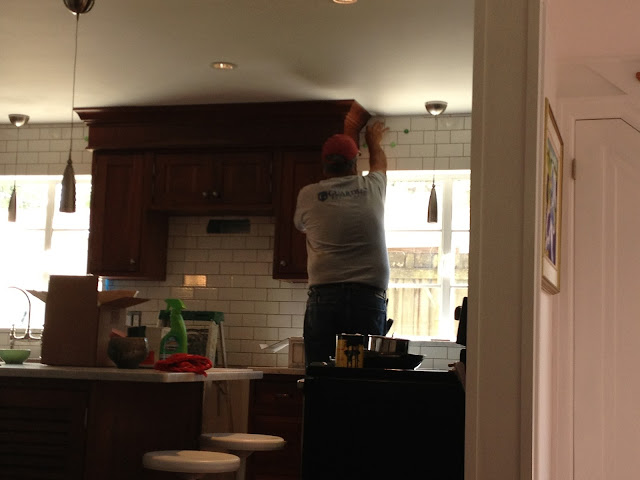 See that? That's a rare Florida breed of workman. Goes by the name of Ruben. Rare in the sense that he is the first one on our flooded kitchen scene who is careful, conscientious, and a good craftsman. He's here right now tiling the walls and window sills. I'm impressed with his work. Kitchen still not usable, but hopefully soon. But we leave tomorrow, so I won't see the finished product for a while.

I once went to a psychic who told me I attract negative energy and to be careful in public places such as grocery stores and malls in case I absorbed some of it. Not sure I believed her but I had a little incident on Saturday while out walking that made me think of that warning. I was strolling back towards my house a few blocks away when a lady (and I use this term lightly) coming on the opposite side and direction started waving and calling out to me to say hello. She was pretty gaunt with no bra and her boobs hanging pretty low to her pant waist line. She told me she lived in the neighborhood, although she couldn't really pinpoint where, and so I did the same. In fact I pointed to the vacant house. She actually leaned forward and touched my necklace, asking me if it was a real diamond. I told her I got it at Walmart and it was fake. She told me my name sounded like a black persons name. I said thank you. And sensing she was jonesing for a fix and about to rob me, I set off quickly towards home. Over drinks with neighbors, I asked them if they knew of P. They did not.

The next morning, MLK Blvd was closed down due to a fire in an apartment complex. Turns out it was arson. A woman had a fight with her boyfriend then torched his apartment forcing the evacuation of the entire building. The next day the accused had her mug shot on the news. It was P. The chick who I met the day before. 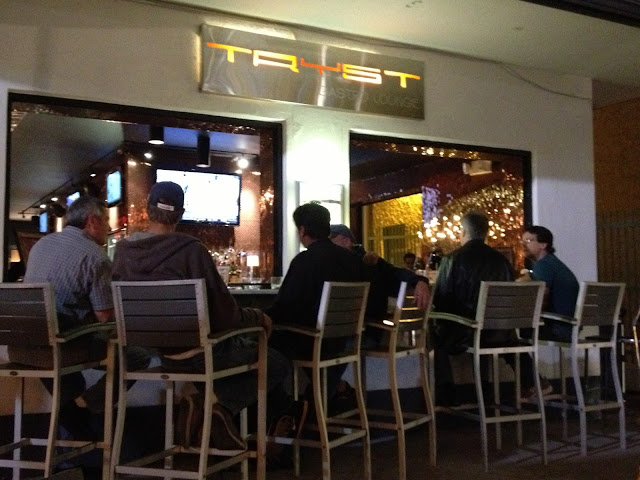 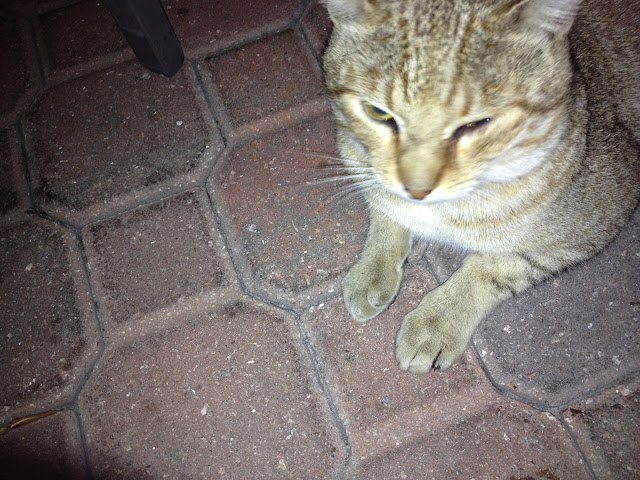 We went to a nice restaurant called Tryst downtown St. Pete. It was warm enough to sit outside. As soon as dinner arrived, so did the local stray cat. Known to live in the vicinity of Tryst, he dines nightly on fine food tossed below the tables from cat loving diners. His name is Trystopher. 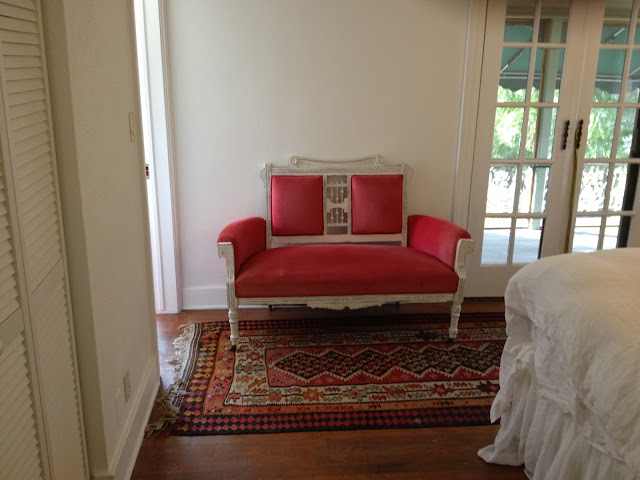 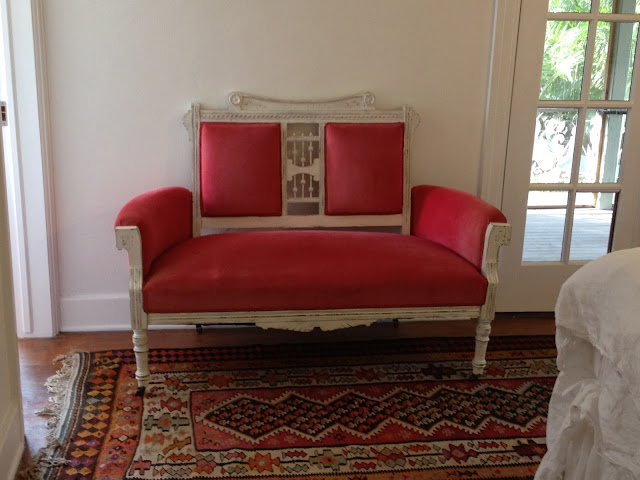 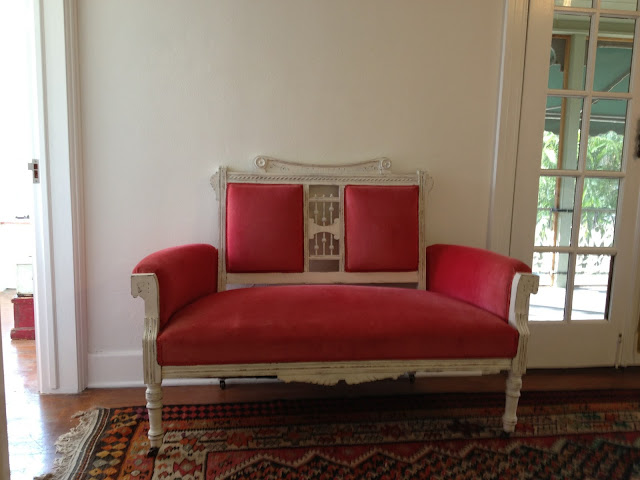 I spotted this beauty at Paper Street Market here in St. Pete while out and about with The Raz Man. He hated it. Declared he would never have something so pink in the house. So, you can imagine my surprise when he went off to run some errands and came home with this as an early Valentines Day present for me. The colour is more like Rhubarb than pink, which makes it much less girly. 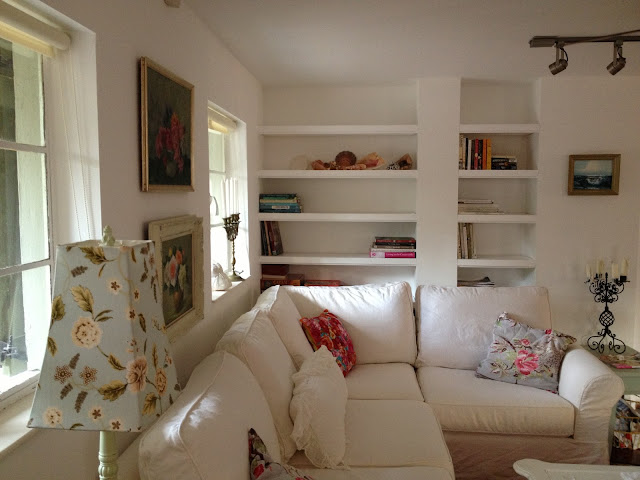 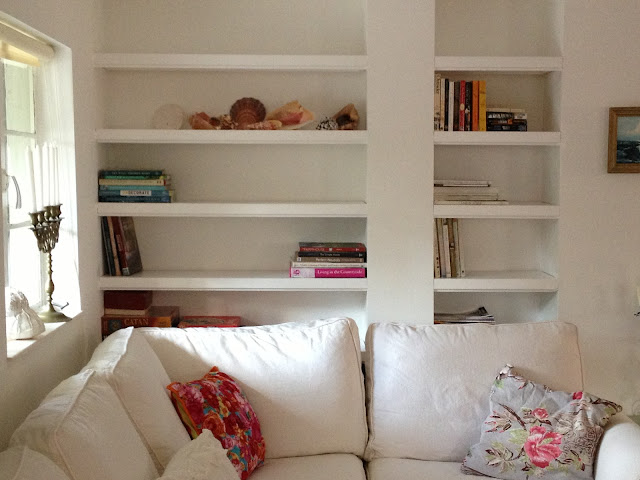 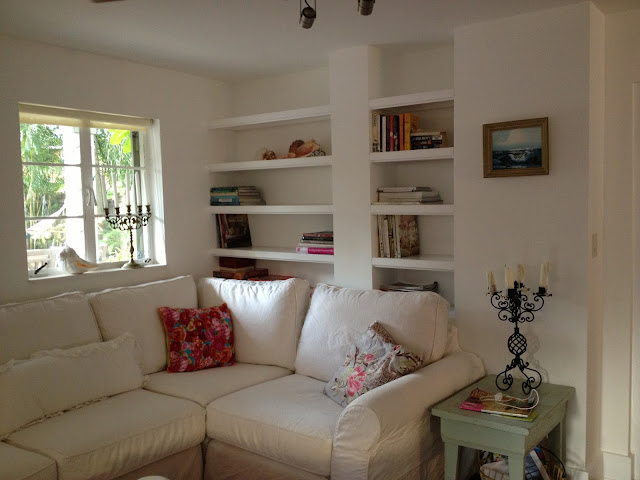 My brother in law came for a visit here in Florida. Upon arrival he asked if I had a project he could do around the house. I told him I would like bookshelves in my weirdly vacant nooks in the living room. And PRONTO, they were built. I'm really chuffed with them. You don't get a better house guest than this.

In other news, the dishwasher once hooked up was apparently full of mold and once we started it up, we literally had to haul it out to the backyard. The stench was awful and unfortunately we have to replace it. We can;t take any chances now that the kitchen has been rebuilt due to water damage.

Still no word from the Insurance Company to tell us the claim is approved. And it appears that Geronimo, the plumber who installed the tap and sink and cut his finger and bled all over my kitchen, must have been in a bit of shock, be cause the cold tap is leaking under the sink. And so it continues............but the lovely shelves make up for the shoddy kitchen work.
Posted by Razmataz at 8:19 AM 17 comments: 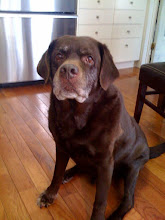